In turning education into a system of mass production we created a superbly democratic system that made the majority of people, and the world as a whole, much better off. It was the right decision. But we lost the most elegant and beautiful minds who were created via an artisanal process.

“Don’t deceive yourself into thinking you’re being sucked into your technologies. Instead, see your tech use for what it is: you knowing what you like, and you choosing to engage in it (at the cost of other opportunities).”

“He realized, like most uber-productive people, that, while there were many behaviors needed to guarantee high output, there was one single behavior guaranteed to prevent all output:

Trying to please everyone.”

“Most men are not wicked. Men become bad and guilty because they speak and act without foreseeing the results of their words and their deeds. They are sleepwalkers, not evildoers.”

Some of the most amazing things that will happen to you in life will come out of embracing your fears and taking a risk, no matter how uncertain it might be. That’s what it means to truly live. One day, however, you’re going to look back with regrets and wondering what might have been. You’ll look back and think you could have done more with your life but didn’t because you didn’t embrace uncertainties.

And the truth is it’s going to feel much worse to discover that your fears were unfounded and your hunch was wrong.

“The whole world is a series of miracles, but we’re so used to them we call them ordinary things.”

“You should, in science, believe logic and arguments, carefully drawn, and not authorities.”

“When someone is giving you feedback, they’re doing you a favor. Even if you’re upset to hear about your mistakes, and even if you think they are wrong and you shouldn’t change your behavior, they’re giving you the gift of information you didn’t have before.”

“The time to prepare for your next expedition is when you have just returned from a successful trip.”

“When I look back on my life nowadays, which I sometimes do, what strikes me most forcibly about it is that what seemed at the time most significant and seductive, seems now most futile and absurd. For instance, success in all of its various guises; being known and being praised; ostensible pleasures, like acquiring money or seducing women, or traveling, going to and fro in the world and up and down in it like Satan, explaining and experiencing whatever Vanity Fair has to offer. In retrospect, all these exercises in self-gratification seem pure fantasy, what Pascal called, “licking the earth.””

Homogeneous groups were more confident in their decisions, even though they were more often wrong in their conclusions.

Look around your environment.

Rather than seeing items as objects, see them as magnets for your attention. Each object gently pulls a certain amount of your attention toward it.

Whenever you discard something, the tug of that object is released. You get some attention back.

Why, even in peacetime, do friends become enemies? And why, even in wartime, do enemies become friends?

Be more kind to your future self.

Fame and fortune don’t guarantee happiness. Nor does relentless self-promotion. Nor does having a gazillion social media followers or seeing tweets go viral.

Those achievements won’t win you (genuine) friends or sort out arguments with your partner. They won’t insulate you from stress or nurture your physical and mental health. They won’t ensure you are loved.

What you avoid today is harder to do tomorrow.

Today’s choices become tomorrow’s position. If you put off things today, they don’t magically disappear tomorrow. They just get added to the list of things you want to do.

Don’t wait till tomorrow. Tomorrow is where dreams go to die.

“Learning how to think really means learning how to exercise some control over how and what you think. It means being conscious and aware enough to choose what you pay attention to and to choose how you construct meaning from experience. Because if you cannot exercise this kind of choice in adult life, you will be totally hosed. Think of the old cliché about the mind being an excellent servant but a terrible master. This, like many clichés, so lame and unexciting on the surface, actually expresses a great and terrible truth.”

People often discuss the standard trendy topics and explain why people working in the field today are doing it wrong and then explain how they would do it instead.

What I’ve found when I’ve asked for details is that, in areas where I have some knowledge, people generally don’t know what sub-problems need to be solved to solve the problem they’re trying to address, making their solution hopeless. After having done this many times, my opinion is that the root cause of this is generally that many people who have a superficial understanding of topic assume that the topic is as complex as their understanding of the topic instead of realizing that only knowing a bit about a topic means that they’re missing an understanding of the full complexity of a topic.

To avoid future regrets, have a bias for action. Speak up. Try stuff. Shoot your shot. Take the chance. URL

The desire to look wealthy comes from a place of insecurity. Don’t waste your life doing things you don’t want to do just because you can buy nice things.

“Be brave and clear. Follow your heart and don’t be overly influenced by outside factors. Be true to yourself.” 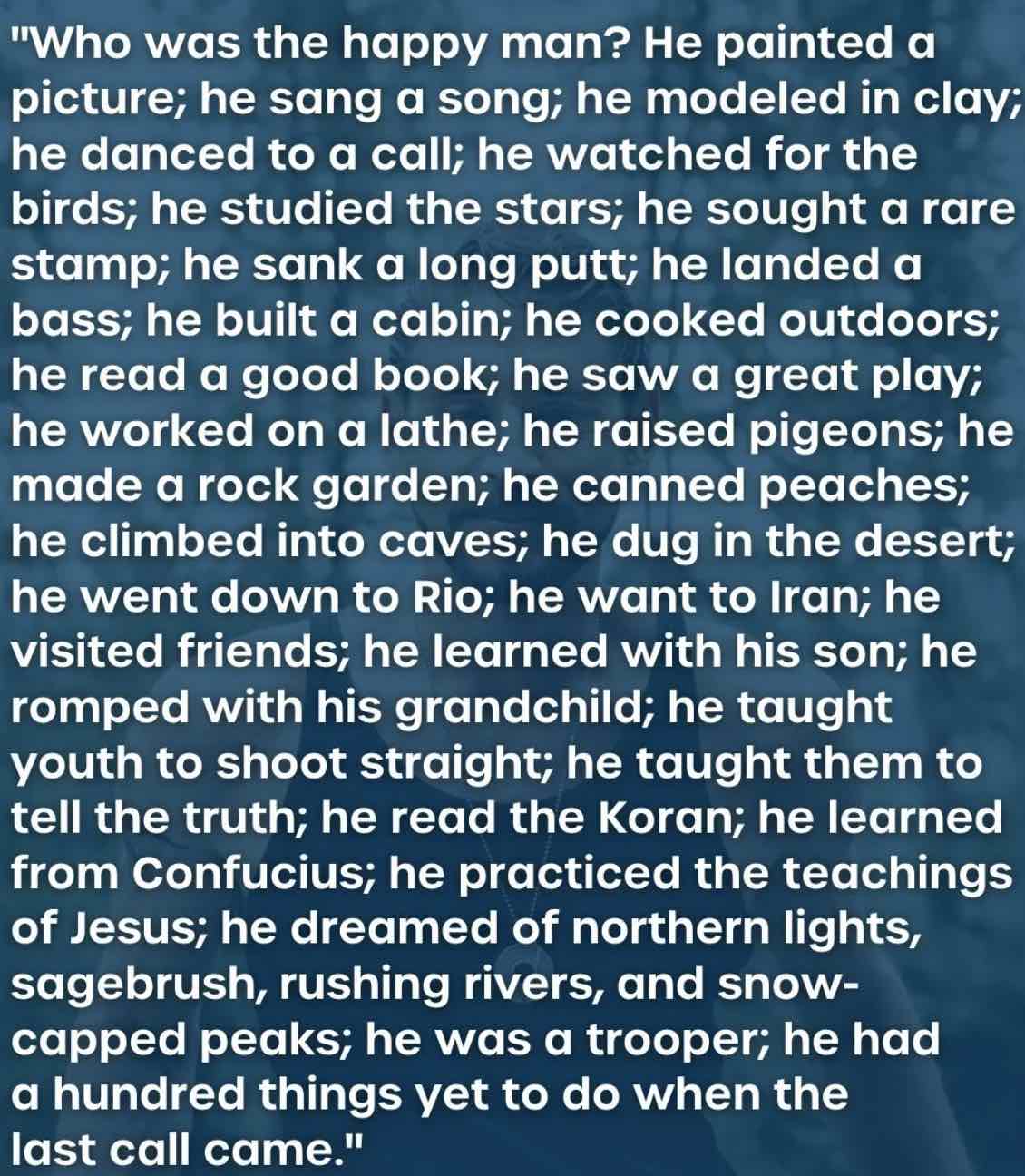 “You can tell how good someone is at making decisions by how much time they have. Busy people spend a lot of time correcting poor decisions, so they don’t have time to make good decisions. Good decisions need good thinking, and that requires time.”

“They laugh at me because I’m different; I laugh at them because they’re all the same.”

“When our public square is governed by mob dynamics unrestrained by due process, we don’t get justice and inclusion; we get a society that ignores context, proportionality, mercy, and truth.”

The key to designing a sustainable republic, therefore, was to build in mechanisms to slow things down, cool passions, require compromise, and give leaders some insulation from the mania of the moment while still holding them accountable to the people periodically, on Election Day.

Most people underestimate how our small daily actions shape our future. They think that big life changes lead to huge differences in our lives, but they don’t pay much attention to what they do every single day.

Yet, the truth is, what we do (or don’t do) day after day determines how we feel and what we end up creating (or destroying).

“A problem is a chance for you to do your best.”